4th of July in the Bay Area 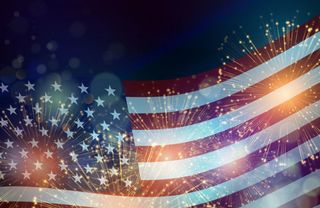 If you’re looking to have a cut-and-dried 4th of July this year, you could just pop up to a fireworks show, watch the explosions, and head back home and call it a day. Around the apartments in the Bay Area, though, there’s so much to do this year that you’d be doing yourself a disservice if you played it “safe” like that. It’s time to get out there and see what the Bay has going on during Independence Day, and we’ve got just the list you need to get started. Read on, as we bring to your attention some of the most riveting July 4th activities going on in the Bay Area in 2019.

Hot dogs and alcohol on the 4th of July — what combination could possibly be better? This year, at Mayes on Polk Street, you’ll get to participate in both. The information for the Hot Dog Eating Contest has yet to be announced, but the Pub Crawl is all set, and after registering at Mayes, you’ll have your run of places like McTeagues, The Rusted Mule, Jackalope, Vertigo, R Bar, El Lopo, Playland, and more.

This event mixes all of Independence Day’s best elements together: great food, great drinks, great company, a boat, and of course, big, booming fireworks displays. The Speakeasy 4th of July Fireworks Cruise is now entering its 7th Year, and take you on a trip back to the 1920s aboard the Fume Blanc Commodore. You’ll tour the Bay Area waters, taking a gander at landmarks like “Treasure Island, Alcatraz, The Bay Bridge, Nob Hill, the Golden Gate Bridge, and the magnificent San Francisco Skyline.”

The July 4th Celebration at Pier 39

Pier 39 is one of San Francisco’s most enduring attractions, and a noted hotbed of tourist activity, so there should be little surprise that they’ll be throwing their own Fourth of July special this year, running from 3:00PM to 10:00PM. There will be live entertainment, courtesy of musical acts like Mustache Harbor, along with activities on the water and, of course, a spectacular explosion of fireworks.

If you like a little small town charm to go along with your Fourth of July festivities, you might want to try heading to Menlo Park for their annual festival and parade. It’s charming, wholesome, and, overall, everything you’d expect from a good-old fashioned Independence Day festival. Once the parade is through, you’ll be welcome to stick around for a day of fun that includes live music, carnival games, jump houses, rock walls, crafts, face painting, tot lot, putt putt golf, disco dome, food and more.

4th of July Cruise Aboard the San Francisco Belle

The Speakeasy isn’t the only July 4th cruise in town. You can get the elegant dinner cruise experience aboard the San Francisco Belle, if you please. It’s the largest dining vessel on the West Coast, capable of accommodating some 1,000 guests, and one of the jewels of the waters of San Francisco. After dinner, you’ll be treated to some impressive fireworks over the Bay — a fitting end to a lovely evening.

North of San Francisco, in beautiful Sausalito, you can experience another small-town celebration, complete with a parade, live music, and plenty of food. The parade here kicks off at 10:00AM, and will have more than its fair share of amazing floats, classic cars, and energetic marchers. Once the parade is over, at 12:00PM, live music, courtesy of the Jimi James Band, will be the main attraction, along with food and fun for the whole family. There will be more music by Cap City Band later in the day, and to end the evening (you guessed it) fireworks at 9:00PM.

Alameda is in on the action as well. The Mayor’s Fourth of July Parade is “one of the longest routes in the country.” At 3.3 miles, that’s no exaggeration, and will be traversing Park Street, Otis Drive, Grand Street, Encinal Avenue, Central Avenue, and Webster Street. It’s not far from Oakland, it’s free, and it starts early at 8:00AM, so it might just be the perfect start to your July 4th.

The Danville 4th of July Parade

If you don’t mind heading out to Danville for a little while, you can stop in on their July 4th Parade, which will start around 9:00AM. This parade is also free, and it’s a big one, usually bringing in upwards of 30,000 attendees every year. The normal trappings of a parade atmosphere, including brass-filled marching bands, imaginative floats, and proud marchers filling the streets.

Try Something Spur-of-the-Moment for the Fourth

All of these activities will provide you with ample amounts of fun for the Fourth of July, but there’s no law saying you have to pick one. In fact, you can mix it up this year with a spontaneous and atypical July 4th celebration of your own. Throw a themed-barbecue, take a road trip, hit the water, or have a classy, alcohol-infused get-together with your friends. It’s all up to you and how you choose to play it. Whatever you decide, though, remember to have some fun and stay safe this Independence Day!

If you’re looking for a “homebase” that puts the best of the Bay at your fingertips, you’d be hard-pressed to find a more suitable location than 4th Street East. Here, in Oakland’s booming Waterfront Warehouse District, you’ll find that making it around the Bay is a snap, and what’s more, there’s plenty to do and see right in your own (incredibly walkable) neighborhood, so anytime is a great time to go out and explore. Ready to experience the Bay in a whole new way? Drop us a line, and learn how you can make one of these fantastic apartments your very own today.