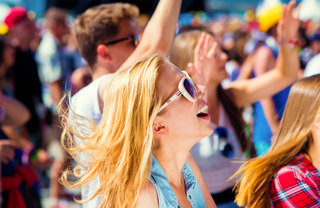 Summer in Oakland — it’s a time of fun, merriment, and outstanding outdoor festivals, if previous years are anything to judge by. This year should be more of the same, and this July, residents of the Oakland apartments will be able to add a much anticipated event to their list of things to do: the Art & Soul Festival:

What should East Bay denizens expect for this year’s edition of this annual extravaganza? There’s a lot on the proverbial docket, so today, we’re going to be breaking down all the best that’s planned for the 2019 Art & Soul Festival, so you’ll be plenty prepared by the time you head down there July 27th & 28th.

We alluded to it in our introduction. Essentially, the Art & Soul Festival is an eclectic array of all manner of arts and music in one place — near the 12th Street/City Center BART Station. This makes it easy for residents across the city to come and enjoy, and makes for quite the sight. Each year draws the crowds, and this year’s edition, held on July 27th & 28th, is expected to have tens of thousands in attendance.

You can get an overview of everything that will be going on by taking a look at the festival’s program guide, but we’ll try to break down some of the most popular features of the two day event here — like the artists and artisan marketplace. If you’ve ever been to an outdoor arts & craft fair before, you should know what to expect:

In addition to a plethora of artists selling their goods, the festival will also feature a community mural painting project, where fellow Oaklanders come together to express their painterly prowess, under the guidance of Attitudinal Healing Connection and the ArtEsteem Artmobile. Come prepared for creativity! And if you like watching a bit of competition, you won’t want to miss the Turf Dance Battle, taking place on Saturday, July 27th, from 12:30PM to 5:30PM:

“Yak to the Bay (a.k.a. Yak Films) returns to treat festival-goers with another must-see Turf Dance Battle. Turf dance originated here in Oakland with Yak to the Bay driving its rise to prominence both locally and all over the world!”

It won’t just be competitive dance, however. There will also be demonstrations and exhibitions, courtesy of the Urban/World Dance Festival going down on Sunday, July 28th. It will feature a variety of dance styles — both national and international favorites and Oakland originals — for you to enjoy on stage. And, of course, being an outdoor festival, Art & Soul will have plenty of great drinks and fine food for you to gorge on, including some of these favorites:

And for the kids, there’s going to be a “Family Fun Zone” in front of City Hall for them to enjoy (supervised, of course):

“Hosted by Oakland’s own Alphabet Rockers! Meet and greet with the beloved Grammy nominees immediately following each of their live performances (to be announced). Two days of live performances, community action and crafts including a reading nook, coloring and crafts ─ make your own bookmarks and buttons!”

Speaking of performances, we almost forgot one of the main attractions for Art & Soul, the big-name headliners performing each day of the festival. That, we think, deserves a little section all its own.

What About the Lineup?

This year, Art & Soul is pleased to be headlined by two Grammy-winning stars: UK phenom Estelle, and Oakland’s very own Fantastic Negrito. Raised in West London and born to sing, Estelle has wowed crowds across the globe with her careful mixture of R&B, soul, reggae, grime, hip hop and dance. While most know here for her successful collaborative singles (American Boy, with Kanye West, and One Love, with Davide Guetta), there’s plenty more in her catalog that will get you moving, and she plans to display the full magnitude of her musical prowess on stage — Saturday, July 27th.

As for the Fantastic Negrito, the stage name of Xavier Amin Dphrepaulezz, he grew up in Oakland (though born in Massachusetts), and hist mixture of blues, R&B, and roots music speaks to life in the city and beyond, and even touches on a number of deeply personal and emotional subjects. His singing and guitar playing will touch the depths of your soul, and simultaneously get you in the mood to move.

These are just the headliners, mind you. There will be plenty more fine acts scheduled to perform, so again, be sure to check that program guide to get a view of the full line out, and see when your favorite and most anticipated performers will be on stage!

Summer’s Going to Be Fun Around the Oakland Apartments

This is the season of outdoor excitement, and few places keep that excitement at a fever pitch like Fourth Street East. You want fun? How about a convenient location that puts you right near the Oakland Waterfront and all its wonders (not to mention within striking distance of great events like the Art & Soul Festival). You want luxury? The comforts and conveniences of Fourth Street East are hard to match, and help elevate the experience to even greater heights. This is the complete apartment package, delivered Oakland style. Come see what it’s all about, and welcome to the East Bay like you’ve never seen before.