Planning Your Day at Pier 39 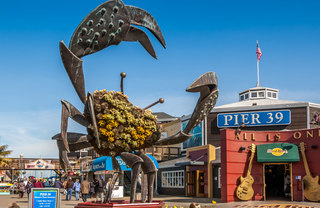 Living near the Bay Area apartments for rent, you may well have heard talk about a place known as Pier 39. Located on the edge of the Fisherman’s Wharf district, this area is well-known as a tourist attraction extraordinaire, and a popular shopping destination and hangout for locals and out-of-towners alike:

It makes sense, then, that you might want to plan a quick visit this summer, in which case, we’re here to lend a hand. And by lend a hand, we’ll be exploring a hypothetical short list of things for you to see and do when you stop by. Hope you’re ready for some excitement, because that’s exactly what you’re going to find at Pier 39.

Making the Most of Pier 39

Once you arrive at Pier 39, you’d do well to bite the bullet and go see those Sea Lions straight away. Wild animals aren’t an uncommon sight at Pier 39, or San Francisco in general, but perhaps the most intriguing denizens of the pier are the majestic Sea Lions. After the Loma Prieta earthquake in 1989, these guys just showed up on the K-Dock, and they’ve been a city attraction ever since. It’s no surprise that they’d want to call the area home — there’s plenty of food and few predators for them to worry about. Beyond that, though, we suspect they enjoy the attention of all the humans who drop by to say “hi” on a regular basis.

If you’re interested in learning more about these guys, you should plan on stopping by The Sea Lion Center, also at Pier 39, and if you’re a fan of marine life in general, a visit to the Aquarium of the Bay is a must. Nestled at the edge of the water on Pier 39, this Smithsonian Affiliate lets you get up close with all kinds of marine animals, like sharks, jellyfish, and rays. While you’re there, you might also learn about the biodiversity around the waters of the Bay, and why the oceans are so important. If your curiosity for the ocean still isn’t sated after this, then it’s time to hop aboard the Bay Voyager to take a tour of the water:

“Step aboard the 28′ RIB (Rigid Inflatable Boat) and get ready for a ride on the bay unlike any you have ever experienced! After you’re outfitted with foul weather gear (to keep you warm and dry from the occasional splash), Bay Voyager takes you around the bay to take in some of its most famous sights.”

Next up on your journey through Pier 39, now that you’re back on dry land? Why not check out some of the local shops that call the pier home? There are more than 60 specialty stores throughout the pier, selling everything from candy to spices and beyond. There’s a not insignificant chance you’ll leave with some San Francisco merch, and you’ll probably feel all the better for having splurged on a few trinkets.

With all the walking you’ll be doing, you’ll surely build up an appetite, in which case, you’ll want to stop in at one of the pier’s many restaurants. Seafood is a big deal here (close to the water, it’s no surprise), but if you want a bit of activity with your meal, you should pay a visit to Players Sports Grill & Arcade. Along with the great burgers and sandwiches, you’ve got sports on the screens at all-hours and a great big arcade with lots of games to challenge your friends to. Get your skeeball arm ready, then see who in your friend group will reign supreme.

If you’re ready to just kick back for a moment at this point, your next move will be to check out Pier 39’s street performers and musicians. There are shows on the daily, and you’re going to see some true urban talent, from singer-songwriters to magicians, jugglers, comedians, and beyond. It’ll provide a nice respite after your meal, and get you rejuvenated for your next stop on your Pier 39 tour.

Ready for more excitement? Time for you to take on The Flyer. This special attraction uses a combination of motion seats and live-action/CGI imagery to simulate a flight around the Bay. You’ll need some real intestinal fortitude to take on this challenge, but if you’re up for it, it’s a pretty fun experience whether you’re new to the city or not.

If a tamer ride is what you’re after, though, you can always hop on the carousel. The carousel at Pier 39 was “handcrafted in Italy,” and impressively painted with all manner of San Francisco landmarks (Coit Tower, Golden Gate Bridge, Alcatraz, etc.). There are 30+ seats on the carousel too, so you and the whole crew can hop on and ride if you want to make it a group outing.

And throughout your tour of Pier 39, make sure you have your camera close at hand. There are plenty of impressive views and memorable moments to take in, and you’ll want to ensure you have them recorded for your photo album. With that, though, you should have more than enough ideas to get started exploring the pier, so what are you waiting for? Schedule some time and get down there today!

Getting There From These Bay Area Apartments for Rent

When you call Fourth Street East home, getting across the way to San Francisco is an easy task. In fact, most of the best things that the Bay Area has to offer are right at your fingertips when your perched here along the waters of sunny Oakland. We’d go so far as to say this is the perfect setup for enjoying the wonders of the Bay, complete with a luxurious residence and a lovely, welcoming community to lay your head at. Why not experience it for yourself? Check out what Fourth Street East has to offer, and make this your choice for superior living — East Bay style.