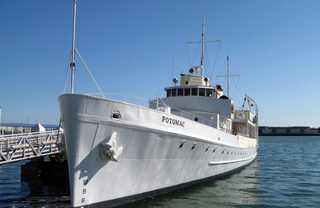 Resting in The Bay, near the Oakland waterfront apartments, sits the majestic USS Potomac, a legendary US Coast Guard cutter that’s perhaps most famed for serving as President Franklin Delano Roosevelt’sfloating base of operations over the course of his presidency:

“The Floating White House was originally commissioned the USCG Cutter Electra in 1934. In 1936 it was renamed the USS Potomac and served as Franklin Delano Roosevelt’s Presidential Yacht until his death in 1945.”

Now, though, the USS Potomac remains in The Bay, a floating visitor attraction for all to see. The ship has brought in more than a quarter of a million guests since it opened to the public in 1995, and we’re willing to reckon that you might want to head over and take a peek yourself. With that being the case, why not let us fill you in on a few details before your visit, so you know exactly where to go and what to expect?

History of the USS Potomac

So, you already know that the USS Potomac was originally commissioned in 1934, as the USCG Electra, and that it was renamed to the USS Potomac in 1936, serving as Roosevelt’s vessel until 1945. Did you also know about the company that constructed the vessel, Manitowoc Ship Building Company, or the ship’s initial purpose?

As the Electra, this ship was a submarine chaser, designed to stop smugglers from importing illegal beverages into the United States. At 165-feet in length, with a cruising speed of 10 to 13 knots (and its skilled crew, of course), the Electra was skilled at its intended task, but after the United States Secret Service deemed the then-current presidential yacht, the USS Sequoia, unsuitable due to the risk of fire (something about wooden hulls, you know), the Electra was commissioned into the Navy, and made Roosevelt’s newer, safer presidential yacht.

It wasn’t handed over as is, though. More than $60,000 went into making the newly-named Potomac fit for presidential service, including the installation of bulletproof glass and redesigning the bathroom and other areas of the ship. It served faithfully as a presidential yacht, one that Roosevelt frequently took fishing, and even played a part in some high level deception when the president had to attend a secret meeting.

The story goes that on the 5th of August in 1941, Roosevelt, after entertaining some guests at Appogansett Bay and then arriving at Menemsha Bight, silently left the Potomac for the nearby USS Augusta. From there, he sped to Newfoundland for a secret meeting with Winston Churchill, where they agreed to the Atlantic Charter and the stage for events that would eventually take place after WWII.

And what was the Potomac doing during this meeting? Distracting potential attackers with a Secret Service decoy, who mimicked Roosevelt until his safe return. All in a day’s work for the crew of this particular presidential vessel.

After Roosevelt passed away in 1945, the Potomac was returned to the Coast Guard. It served as fishery enforcement boat for a time, but after that fell from the limelight, ending up with a string of various owners that even included Elvis Presley, who had purchased it for $55,000 in 1964. The Potomac’s luster continued to decline from there, perhaps reaching its lowest point (figuratively and literally) after being involved in a drug bust at Pier 26 in San Francisco, and later sinking near Treasure Island.

This wouldn’t be the end for the Potomac, though. The Navy refloated the Potomac, then sold her to the Port of Oakland. After some extensive grant money was allocated for the project, Franklin Roosevelt’s oldest son, James Roosevelt, began a lengthy restoration project that would last until 1993. Once it made its first voyage as a restored ship, the Potomac recaptured its lost “shine” and became a tourist hit.

Checking out the USS Potomac Today

Nowadays, you’ll find the USS Potomac near 540 Water Street Oakland, CA, under the watchful eye of the Potomac Association and preserved as a National Historic Landmark. The Potomac Association, for their part, is dedicated to “preserving the legacy of President Franklin Delano Roosevelt through education for students and adults.” With that goal in mind, they carry out a range of educational programming to help inform visitors, including tours of the ship, discussions about history, and “cruises [that] highlight the impact of the FDR Era on our local and national history.”

Tours are about 45-minutes in length, and available just about all Wednesdays, Fridays or Sundays. If you want to kick the experience up a notch, though, you’ll definitely want to try one of those cruises:

“The Potomac offers cruise opportunities on San Francisco Bay where you will see the Bridges of the Bay and the Islands of the Bay among many other wonderful sights. While you cruise you will learn about the history of San Francisco Bay and FDR’s role in its development. Our public cruises include live narration from experienced, enthusiastic volunteers.”

You can even check out a special event cruise, which typically occur during holidays like Mother’s Day, Father’s Day, July 4th, Fleet Week (some of those are coming up, you’ll note, so keep the calendar clear). It’s a great way to spend a bit of time out among the sights of Oakland, and a great way to learn about a bit of American history to boot. Be sure not to pass this one up!

Remember It’s Not Far From the Oakland Waterfront Apartments

Getting to the USS Potomac from places like Fourth Street East is about as easy a task as they come, and something you’ll find to hold true about a good number of popular Oakland hangouts when you call these fabulous apartments home. There’s always plenty to explore around Oaktown, and this community is the perfect place to hang your hat while you make the most of the East Bay. Check out what’s in store at Fourth Street East, and welcome to the neighborhood!