The Fourth Street East Guide to Biking in Oakland 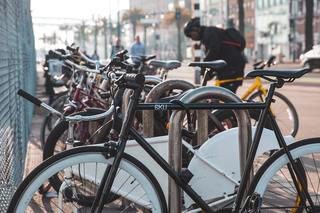 Oakland is a huge biking city, and the city has done a great job supporting cyclist commuters or hobbyists. In fact, we’ve been named a “Gold Level Bicycle Friendly Community” by the League of American Bicyclists, and we’re only one of 34 cities who have earned the award.

It makes sense: we have thousands of cyclists who share the road with cars, buses, and pedestrians every day. Our bicycle facilities, hundreds of miles of bike lanes and trails, and vibrant community of on-the-ground organizers have worked together to make Oakland a safe and fun place to bike.

Fourth Street East is pleased to support our residents in biking. We have a bike storage room on the first floor so that residents have a safe place to keep their bicycles when not in use without taking up space in their apartment.

When out in the city, there are lots of city-owned bike parking, and that doesn’t mean just a few metal posts to tie your bike to. There are bike lockers available for use, which provide more security and coverage. The city is also populated with strong public corrals and racks. There are also a number of private companies who offer their own bike parking options, including lockers and attended stations.

Unfortunately, Oakland is known for bikes being frequently stolen, so you have to be sure to lock up securely and take prevention tips. We recommend registering your bike online to make filing police reports easy and keeping a record of your bike including serial number and photos.

There is a great guide from Bike East Bay on theft prevention.

Oakland has 160 miles of bikeways, and that doesn’t even include the hundreds of miles on the Bay Trail.

Bikeways around the city include buffered lanes, protected lanes, as well as unprotected lanes on many roadways. The Oakland bikeway map also indicates safe neighborhood routes and roads that include signage and markings to protect cyclists.

We’re happy to share that around Fourth Street East are plenty of safe bikeways, including buffered lanes, to help our residents bike to and from the building with confidence.

For recommendations on bike routes for scenic rides around Fourth Street East, check out our guide.

There is power in numbers, and there are several groups around Oakland and the East Bay who are dedicated to advocating for cyclists in law and infrastructure. They also put on some great group rides so that cyclists can learn more about routes in safety as well as put on events, educate citizens, and more.

Oakland Yellowjackets: This biking club is largely devoted to putting on friendly rides for all ages and abilities, and tout a “no-drop” policy so no cyclist is left behind. Members get benefits, although nonmembers are also allowed to join in on rides.

Bike East Bay: Bike East Bay is a community leader that unites people and organizations throughout the Bay Area in bicycle advocacy and justice, education, and engagement. They campaign for infrastructure improvements, offer free classes, and put on events to help cyclists get to know each other.

Cycles of Change: This organization is a school education program that promotes bicycle knowledge and safety among youth, but also so much more. They founded The Bakery, a community bike shop, integrate their teaching with gardening/nature, and host bike clubs for young riders.